An Examination of the Life and Works of George Orwell 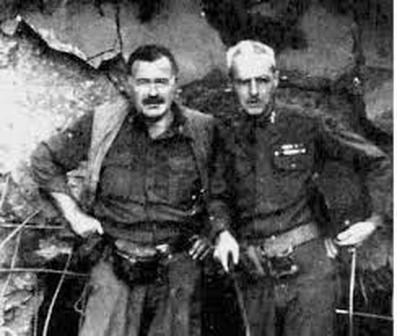 George Orwell with his friend and fellow revolutionary, American author Ernest Hemingway. Both would write about their experiences in the Spanish Civil War in their respective novels: Homage to Catalonia and For Whom the Bell Tolls.
Perhaps one of the first people to influence Orwell's writing and life was his teacher at St. Cyprian's, Mrs. Cicely Vaughan Wilkes. Wilkes taught her students to write simply and clearly, without become too wordy and complicated. Orwell's writing seems to heavily follow her teachings. In the future, he would teach others to write similarly. But Wilkes was not the only one to shape his distinctive style of literature.  Orwell fell in love with the simplistic straightforward story telling of Somerset Maugham, who he considered his favorite author of all time.
Another teacher of Orwell's was prominent Dystopian author, Aldous Huxley. Huxley would serve as a substitute at Eton College and teach Orwell French. Huxley's dystopian style would serve as a model for the young author. Elements of Brave New World, by Aldous Huxley, would be in Orwell's 1984, though the two maintained distinct styles. In both novels, the government uses catchy phrases to keep the population under control. In Brave New World the addictive drug Soma and enticing daily casual sex keep people happy. The population is conditioned from a young age to do their jobs happily and serve the government. Meanwhile in 1984, the government uses fear and oppression to stop rebels. In Orwell's later years, he would resume contact with Huxley. The two debated whose novel would be more likely in the near future. Huxley argued that the ruling class would become bored with 'stomping on the face of man forever', and would instead turn to less wasteful methods of control
Other authors who Orwell looked up to and enjoyed reading were Dickens , Shakespeare, Lawrence, and Hemingway. Jonathan Swift's novel Gulliver's Travels would be an all time favorite of Orwell's. Swift and Orwell both were strongly anti-imperialist and used satire to show their political views. Jack London's style of writing would be a favorite of George and would influence his novel The Road to Wigan Pier, which contained themes of poverty and the struggle of the working class.
However, George Orwell was influenced not only by other authors, but also by his life events. During his education at St. Cyprian's, Orwell experienced bullying from his wealthier piers. Students who were there on scholarships, such as Orwell, were alienated due to their socioeconomic status. Wherever he went, he saw inequality; from the Spanish civil war, to British colonization, to his time living on the streets, and even during his time at school. Throughout Orwell's writings, a theme of hierarchical structure and inequality would be present. He would devote much of his time pursuing social justice. Through his writing he hoped to raise awareness about the threat of fascism, Stalinist communism, imperialism, and overzealous nationalism. While Orwell was both a patriot and a socialist, he believed that nationalism and socialism were dangerous if left unchecked. He saw the murderous reign of Stalin during the Spanish Civil War and the damage British imperialism did to the Indians and Burmese during his time as a police officer. He would write about these threats in his novels Animal Farm and Burmese Days.
Orwell realized that class divisions were rampant in the British Empire. There was the capitalist elite, who exploited the working class for manufactured goods. As well, the European colonizers oppressed those who they colonized. While Orwell loved his country and was eager to serve the Commonwealth during World War Two, he realized that the government could use nationalism to justify war and genocide as Hitler and other fascists did. Socialism and national identity in moderation could help diminish class distinctions and help those Orwell saw abused and starving on the streets of Paris and London and in the textile mills of Burma.
Powered by